Lost, but not forgotten 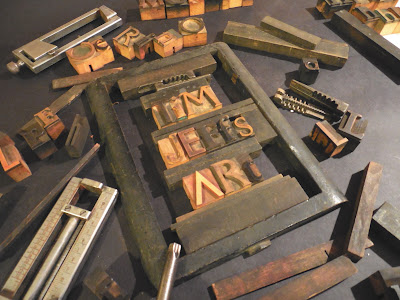 When I started my first part time job in publishing during my senior year in college at Parson School of Design I caught the tail end of the golden age of typography. It was 1986, and desktop publishing was still a few years away from taking off. The only computers in the office were a few Mac Plus' which the editors used to write on. Any type design was still marked up, sent out for typesetting to type houses, galleys where returned and then cut and pasted up onto boards. My first job, at the publishing company called Rebus where I worked, was making stats of type and photographs for layout. Eventually I worked my way into the art department and started designing and layout out book spreads myself. The good old days of xacto knives, rubber cement, rubber cement thinner, and letter spacing by hand. I was taught the art of typography from art directors and designs who appreciated true letter spacing, leading, kerning, tracking, and the color of typography. When the first Mac II showed up in the office I was the first to embrace it, and was captivated by its possibilities. 27 years later I'm still designing books on the Mac. But I never forgot the meaning of what true typography was and how important it was to learn the art of typography. 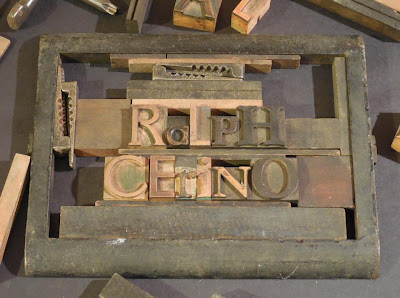 Ralph Cerino's Facebook picture that I immediately took an interest in 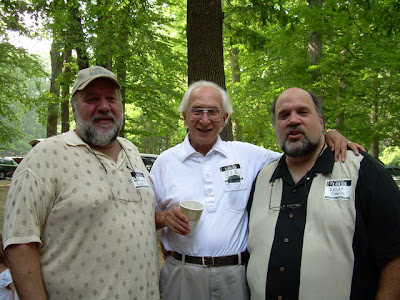 
My Uncles, Lou & Ralph Cerino, run a 86 year old sign company in Philadelphia, PA (since 1927) that my grandfather started called Bright Sign Company. The company has been at the same location, 1215 Race Street for 69 years (since 1944). Recently Ralph posted on his Facebook page his name laid out in wood typography that instantly caught my eye. To me it was like a beautiful piece of sculpture. Something you could touch and feel and be a part of. I wrote to Ralph and asked him about the wood type pieces he created his name with. He was wonderful and told me in detail about it, and the families sign business, and my grandfather's artistic side. 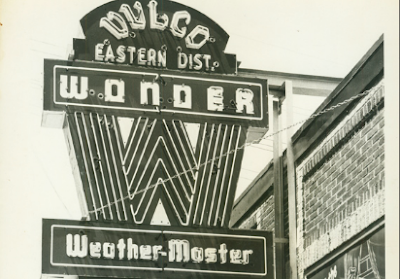 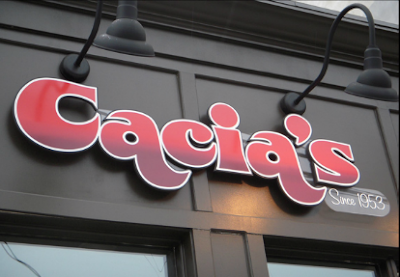 and a sign that the same company, 86 years strong, creates today

Ralph: "The wood type is all that is left from an antiquated poster printing machine (more like a proof-press or a litho-block printer) that was designed & used for retail department store in-house poster & card printing, called a 'Print-A-Sign' machine. While using mostly pre-loaded matrices with different fonts & point sizes of metal type, these occasional wood type fonts would find their way into the mix for usage.  Dad also used to make rubber stamps before photopolymer dies changed the stamp industry. Most of the metal type we had for that (for hand-setting) is gone, but for a few fonts & pieces we occasionally find, along with block cuts & logo or specialty text dies. The wood type that remains, that I used for your pieces, is just enough to get by for simple applications.

The chase (solid iron frame) that I locked up your type in was from an old postcard letterpress that handled up to 7x9 printing.  All that is left is what you see in your photo.

We used to have a 12x18 & a 24 x 30 platen (clam-shell type) letterpress used primarily for die-cutting, but once that technology changed, they became obsolete for our usage, & we drifted away from it. All were sold (mostly for scrap) & are gone now, replaced with plotters, rollers, knives, & inkjets. It's hard to keep up, sometime, the technology changes so rapidly." 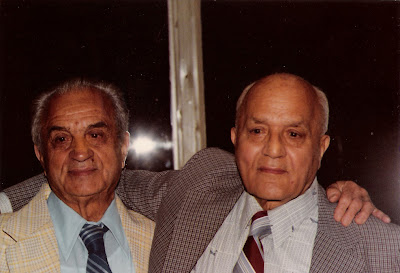 
My Grandfather and his love of Type

Ralph: "For a 15 year-old immigrant, Louis Cerino, coming to this country in 1912 (to join his 4 other brothers who were already here), he worked hard & never let any grass grow, constantly moving & learning as he made a life & established several businesses over the course of his lifetime, that ultimately supported us as a family.  His first job was hawking newspapers on a street corner, a job that remained (on Sundays) in the family until 2000. He also started artistically as a show card writer (pen & ink, like you, then with a brush) at Wanamaker's Department Store. That quickly evolved into working for other sign sub-contractors who provided work to the store for their window-decorating, visual merchandising, & other departments. Within 15 years, he had started the company we run today (although then it was called 'Jim Bright with the Bright Ideas', but found it's way to become Bright Sign Company). We have been in this location, 1215 Race Street, for 69 years (since 1944), & have the junk piled around the shop & in the basement to prove it." 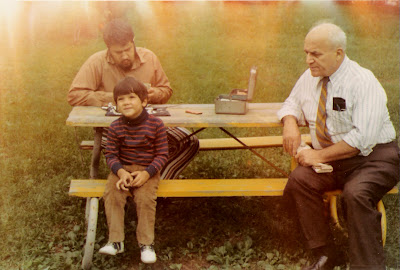 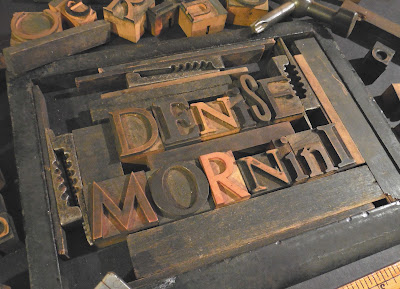 Ralph did my sister Denise's name next 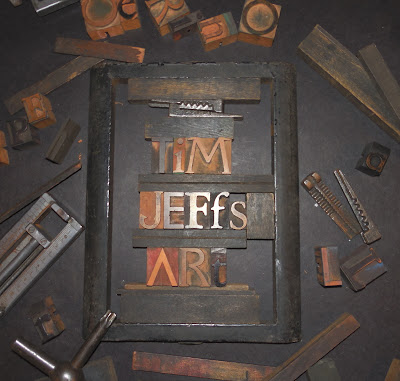 Then Ralph set my Blog's name in wood type 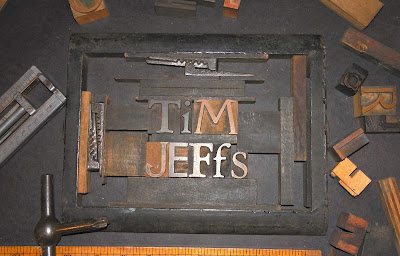 along with several versions of my name 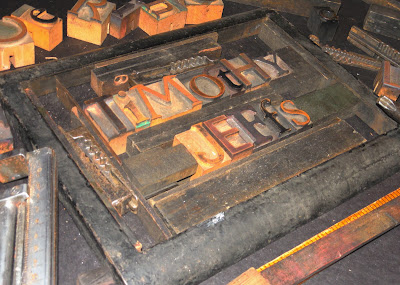 and another of my full name 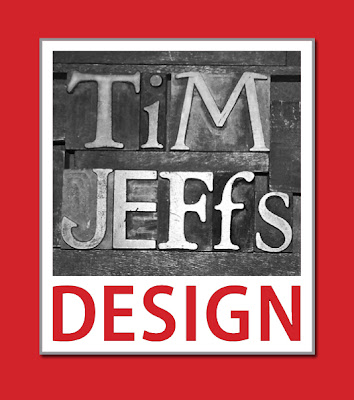 Thanks Ralph for the the appreciation of type, the inspiration, the memories of my short time involved with REAL typography, the family history, and the wonderful artistic type creations you made for me. 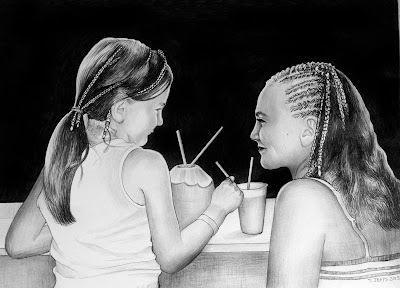 Just finished a commissioned piece for Jim Gardner. It's an 11"x14" pen and pencil drawing. It's been a while since I've drawn people, let alone children. The subtle tones and smoothness of skin is challenging. I used pencil for the skin and inked in the hair and background with pen. It felt good to draw the human figure again, but I need lots of practice in this area.

Posted by Tim Jeffs Art at 6:36 PM No comments: 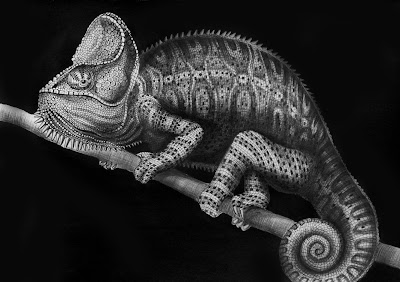 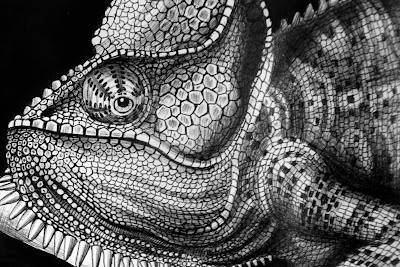 Posted by Tim Jeffs Art at 7:35 PM No comments: 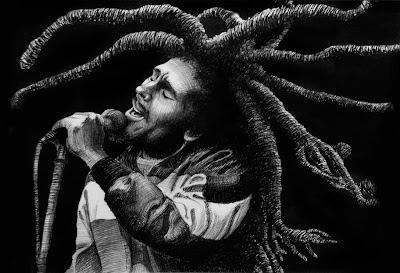 This piece is an 8x10" pen and ink wash on paper. Finally broke out my dipping pens with nibs for this one. First go at it felt great, but I've got a lot of learning to do when it comes to control with a nib pen. I've got to say, I love the scratching sound of the nib on paper, and the sound of the pen hitting the glass of the inkwell every time you dip the pen. Nip pens just demand loser drawing, at least for me. So hopefully with more practice I'll loosen up even more. Sorry for the terrible quality of the photograph. I forgot to take a picture before I framed it, so the glare on the glass made it hard to get a clear shot. 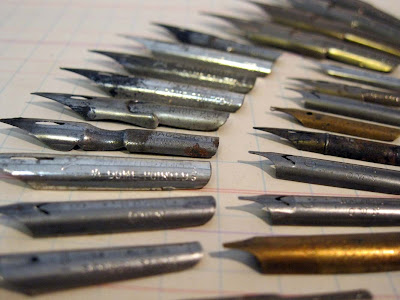 Time to start experimenting with different nibs. There are a ton to choose from.
Posted by Tim Jeffs Art at 10:23 AM No comments: 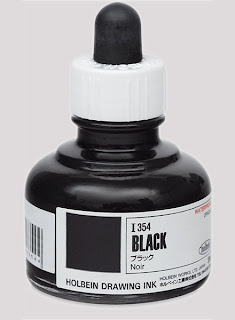 After much research, running around New York City to various art supply stores, (Blink which is my favorite, amazing art store at 1 Bond St) I found a great ink for my backgrounds this week. Its called Holbein Drawing ink. I've heard its a fan favorite amongst comic book artists. The big advantage to me is that it creates a very deep, dark opaque black on the first application. It's also waterproof which is important since my hands are constantly rubbing all over my drawings. It comes in two types, standard and special. Standard is a shellac based ink and special is acrylic. The special is thicker than the standard, so it dries quicker and seems to have the tendency to gum up. But the rich black it offers is amazing! So for now this is what I'm using. I'm by no means an expert and If you have any other suggestions of your favorite ink brands, I'd love to hear about them. 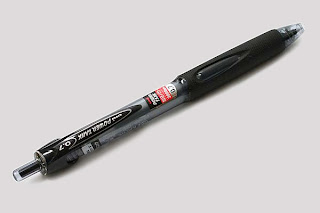 Next in my arsenal is the pen I draw my detail work with. I'm still not completely satisfied with my final results yet, so I'm still searching and researching to find the ideal pen. The best ball point pen to date, out of all I have tried, is the Uni-ball Power Tank Retractable ballpoint pen. Thanks Dave Gordon introducing one to me! As in an earlier post I mentioned it comes in 3 tip sizes. 1.0, 0.7 and 0.5. I find the 0.7 the all around best size for what I'm drawing. 1.0 feels too clunky, and 0.5 feels too sharp and I feel like I'm going to cut through the paper when i'm using it. But the 0.7 is perfect, and as goldilocks said "the 0.7 feels just right!" The company say this pen writes on wet paper, upside down, in temperatures as low as -20 C and even in zero-gravity. How cool is that, but I haven't been able to prove it by drawing in space yet. Again, if anyone has suggestions too a great all around ballpoint pen, please let me know. Up next...paper!

Posted by Tim Jeffs Art at 1:00 PM No comments: 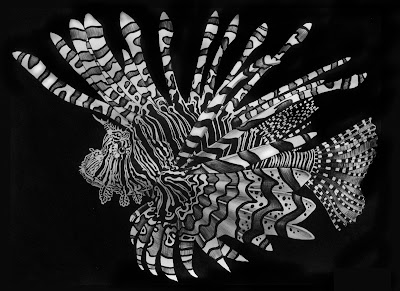 Here's my latest ink drawing. I'm going to do a series of sea creatures. Being that I love diving, the ocean and everything from the sea I couldn't resist. And the level of detail that adorns many aquatic life intrigues me. Click on the images to view them larger. 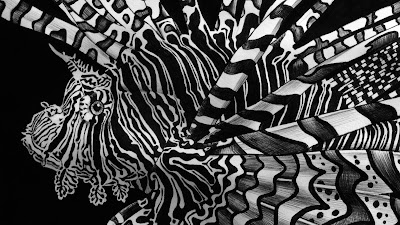 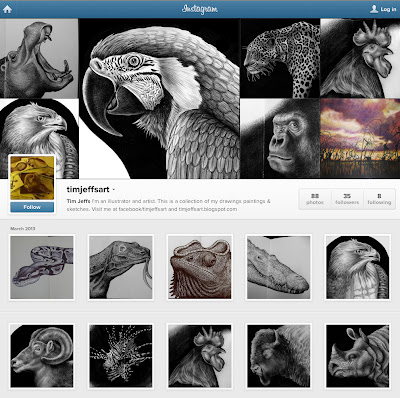 I Just got my instagram page up and going. You can find it at" instagram.com/timjeffsart. I'll post photos of works in progress on instagram as they are progressing, and then upload the finals to the blog once they are complete. Now that I have the electronic side of sharing my artwork underway, I hope to spend more time creating new pieces at a more rapid pace.
Posted by Tim Jeffs Art at 6:32 AM No comments: